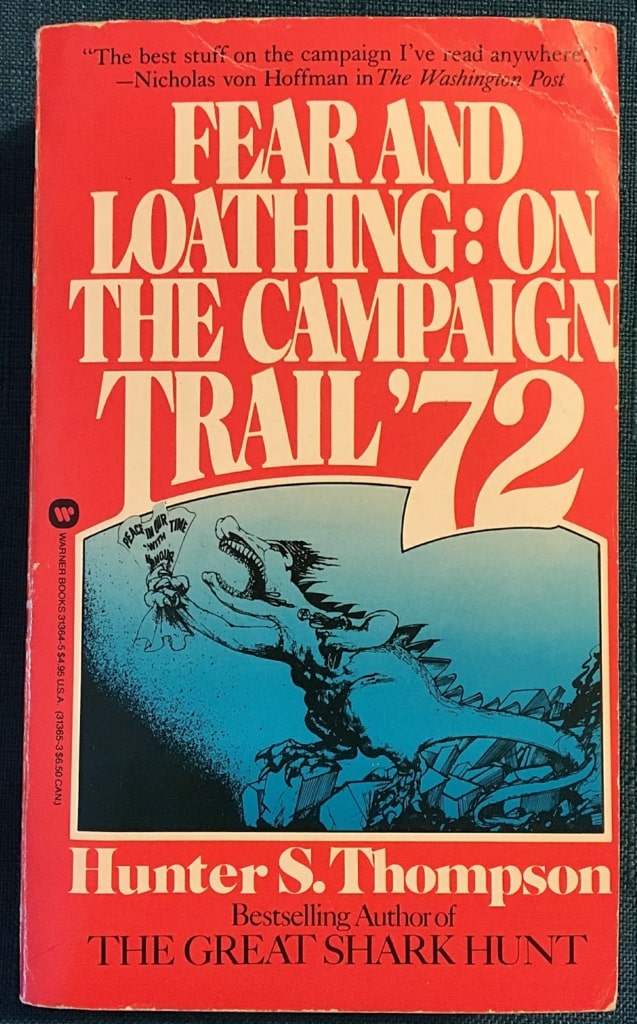 I think what most people seem to be tired of are the sort of lint-headed, wooly-minded – what a lot of people call do-gooders – people who would like to do the right thing, but who just can’t get it up. That kind of candidate is going out of style.

That’s Hunter S. Thompson, describing the failure of George McGovern to beat Richard Nixon. Almost 50 years ago. And yet…

Ronald Reagan got it up. Bill Clinton, um, got it up. Barack Obama and George W. Bush both seem like do-gooders on the surface. But both of them got it up – Barack Obama with personal grace and high-minded rhetoric, GWB with big-hearted, frat-boy back-slapping.

Maybe Dr. Thompson was right, but it took us a while to catch up. A mojo-less candidate hasn’t won a presidential election since HW in 1988, though a couple have won the popular vote (Gore, HRC). And Trump defeated a slew of milquetoast do-gooders in 2016 – Jeb, Marco, Kasich, HRC.

I’m reading HST’s classic Fear and Loathing on the Campaign Trail ’72. This is the Bible of American political journalism, and it seems that most modern political journalists – while not actively trying to emulate Dr. Thompson – imagine that they would write something similar if they weren’t constrained by timid editors, corporate travel budgets, and other annoying market forces.

This is the first book by Dr. Thompson that I’ve ever read. And it’s quite something. I do fear that someone trying to imitate him might miss the pieces that make the book so special. You might be able to mimic the careening style… or the naïve idealism masked with cynicism… or the admission of bias… or the star-fucking . But are you also willing to be brutally honest? Do you love other people — not just the stars, but the stars too — as much as Dr. Thompson does?

And once someone has done this particular thing, do we need anyone else to do it again?

Two weeks ago, I knew very little about the 1972 election other than that McGovern was a pretty liberal dude who lost to Nixon. And now I’m convinced that American politics is still churning on the same wheel it’s been on since the 1960’s. And 2020 is likely to be a rerun of 1972. I put the over/under on Trump’s margin of victory at 23 points.

Posted in Uncategorized
by Tim DeRochePosted on February 3, 2018 No comments yet

Imagine for a moment that the Bush-era DOJ had sought a FISA warrant to surveil someone on the Obama campaign.  And they didn’t disclose to the court that a significant piece of evidence was an unverified product of oppo research funded by Romney.

If you reverse the fact pattern, then Rep’s are apoplectic about the Dem’s ties to Russia… and Dems are appalled at the surveillance-of-a-political-foe-justified-by-oppo-research.

Who can doubt that Trump would have conspired with Putin if he thought he could get away with it? He has no moral compass. So let’s see what Mueller’s got. There’s no evidence of collusion/conspiracy yet….just a bunch of ham-fisted, ethically dubious meetings and emails.

If real evidence of conspiracy comes out, then impeachment is the only option. Until then, I’m keeping my powder dry.

Posted in Uncategorized
by Tim DeRochePosted on January 12, 2018January 23, 2018 No comments yet

*My ancestors came to America from shithole places like 19th century Ireland and rural Canada.  My best guess is that they were uneducated, poor, rude, and smelly.  They were escaping their shitholes to make a better life in America for their families.  And they did.  They may even have endured a shithole existence in the US for a while.  But things got better.

*That said, regular people talk like this all the time.  Haven’t we all heard (or used) that word used to describe certain US cities?  I’ve heard it.  I’ve used it.

*America’s journalists want us to understand just how hard this ordeal is for them.  Should they report accurately on this vile man?  Or should they protect us — their sensitive readers — from these horrible, horrible words?  Pause for a moment and consider the troubling plight of journalists in a time of Trump.

*The hulabaloo about that one horrible, horrible word is distracting everyone from Trump’s point: He wants to have more merit-based immigration and less lottery-based immigration from poor countries.  This is not a controversial idea.  Obama and GW Bush both said the same thing.  Obama explicitly tried to “promote the kind of high-skilled immigration that has helped fuel America’s economic engine.”

*I actually believe that Obama, GWB, and Trump are all wrong on this issue of skilled vs. unskilled immigration.  My ancestors certainly weren’t skilled when they came into the US.  The US economy is the greatest wealth generator the world has ever seen.  If you’re a poor, uneducated person, the US is the place you go to make sure that your children and grandchildren are not poor and are not uneducated.  Who is going to be the most loyal to the idea of America?  People whose lives are transformed by our freedom.  And then there are the short-term gains: Poor immigrants are the ones that are willing to do the unattractive jobs and work for lower wages.  I would argue that low-skilled immigrants have helped keep inflation down for the past 30 years.  They’ve been a huge boon for our economy, and we’re all better off for their contributions.

*People like Dick Durbin and Bob Schieffer are awfully quick to call racism.  Trump is almost certainly biased (meaning that he prefers people who look like himself).  He might in fact also be racist (meaning that he consciously believes certain races to be superior to others).  But I’m wary of any journalist or politician who uses that word — racist! — to describe someone they disagree with.  It’s too easy.  And I fear they haven’t learned the lesson of the Boy Who Cried Wolf.