Born and raised in Milwaukee, Tim DeRoche emigrated to California to attend Pomona College, where he studied English literature. His first book, The Ballad of Huck & Miguel, was featured on CBS Sunday Morning, NPR, the LA Review of Books, and the Mark Twain Forum.  It was also selected by the Pasadena Public Library as the “One City, One Story” book for the Summer of 2019.

He has served as executive producer and writer of the children’s science series Grandpa’s Garage, produced by Turner, and is a graduate of the PBS Producers Academy at WGBH in Boston.

Tim lives with his wife Simone and three young kids in the La Crescenta neighborhood of Los Angeles.

This is a very mysterious award, and I’m not sure how much we’re allowed to say about it. It honors… 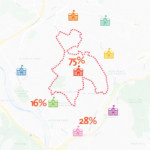 After seven long years of research and writing, my new book finally comes out tomorrow. Education Next published an excerpt…